This article is aimed to design and demonstrate a simple 5 Channel IR Remote Control System to drive five loads. The input signals or the commands are sent from a transmitter using IR transmission and received by the IR receiver, processed and used to drive the loads. At both the transmitter and receiver, a microcontroller is used to process the signals.

Principle behind the Circuit:

The circuit operates on the basis of infrared communication. Signals are transmitted utilising an infrared signal as the carrier in IR communication. The microprocessor processes the switch input signal, which is then encoded by the encoder, modulated, and transmitted by the transmitter. The IR receiver demodulates the modulated signal, the decoder decodes it, and the microcontroller processes it to control the output loads at the receiver.

The transmitter circuit is made up of three ICs: an Atmel89C51 microcontroller, an HT12E encoder, and a 555 timer.

The reset circuit was developed with a 100ms reset pulse width and a 1.2V voltage drop at the reset pin in mind. To meet the requirements, we use a 10K resistor and a 10uF capacitor. The HT12E encoder with its 7 address pins and terminal enable pin connected to ground, and 4 data pins connected to Port 0 make up the output side.

The timed oscillator circuit is designed in the second step of the design. Using a 555 timer, we must create an astable multivibrator. With a desired oscillation frequency of 38 KHz and a capacitor value of 0.01uF, the values of Ra and Rb are 760 ohms and 1.5K, respectively.

Components Included in this Transmitter Circuit:

List of components and the corresponding values are shown below –

How to Operate the Transmitter Circuit?

When the circuit is powered, the compiler with initialize the stack pointer and other variables and calls the main function. It scans the input pins, i.e. the signals from the switch.

In case any of the switches is pressed, as per the program, the compiler assigns the corresponding 4 bit value to 4 pins of the output port, i.e.  The required 4 bit output signal is generated which is fed to the data input of the encoder.

Components Included in this Receiver Circuit:

List of components and the corresponding values are shown below –

The TSOP 1738 or the IR receiver receives the transmitted IR signal and demodulates it using a pin diode and filter configuration. The receiver’s output is fed into the decoder’s input, which examines the data at least three times before sending a high pulse to the VT pin to signify a legitimate transmission. The serial data input is subsequently converted to 4 bit parallel data output by the decoder. The microcontroller is booted and the input pins are examined in the meanwhile. The compiler assigns a high logic signal to the associated input pin of the relay driver for a certain 4 bit input signal.The Darlington array IC in the relay driver ULN2004 changes the voltage level of the received input signal to give a low voltage signal at the appropriate output pin. As current flows through the relay coil linked to that output pin, the armature shifts from its initial position to complete the circuit, and the lamp begins to shine (not shown in the picture). This procedure is the same for turning on all other lighting. 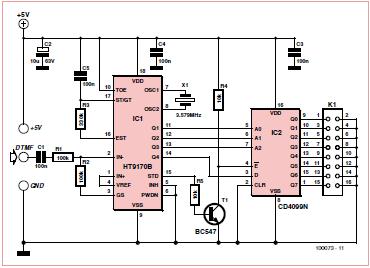 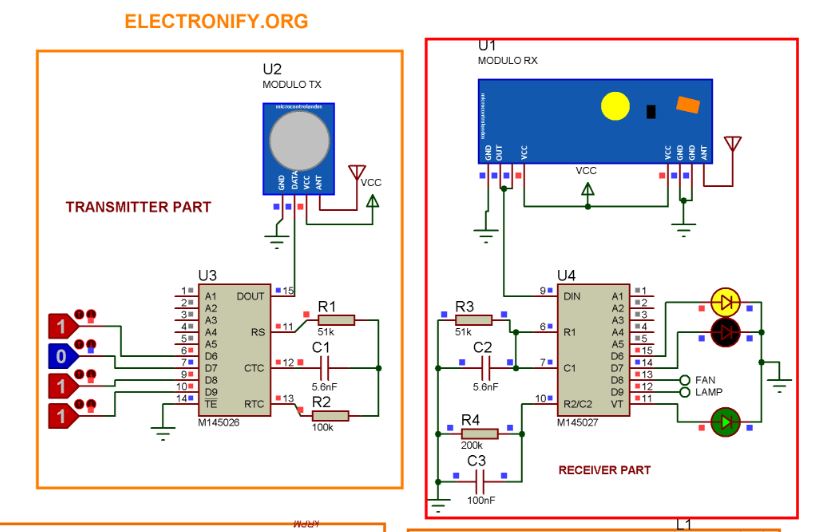