The indicator shows when a fish has taken the bait. Until that happy moment (at least for the angler), the bite sensor is open. so that both LEDs are out. When a fish has been hooked. the sensor closes the current loop. whereupon both LEDs light. In addition to these diodes, a buzzer may be used to give an audible signal. D2 continues to light. even when the sensor has been reopened. for as long as the thyristor has no holding current. In this way, each tug on the hook line is indicated by D1.

The circuit draws a current of 20-60 mA. depending on the type of LED and whether a buzzer is used. The sensor is made from a mercury switch. a cast, half a meter of stranded wire and a 3.5 mono jack socket. The cast is placed in the line directly under the reel. When the line is tightened, the indicator is actuated. 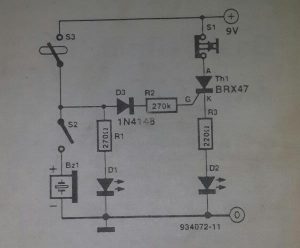 The delay circuit ensures that a car's interior light remains on for about five seconds after all the doors have...