Vinyl or CD: which has the better sound? It’s a question still hotly debated among audiophiles everywhere. We will try to shed a little light on what lies behind the question and look at a simple circuit that can significantly enhance the sound from a CD player. Sometimes, on first hearing a new low- to mid-range CD player, the sound is not altogether convincing when compared to a record player. It is worth looking at the recording and replay processes as a whole for both CDs and records to see why this might be. Assuming that we start from the same source, or master recording, of a given piece of music, the differences are broadly as follows. Records and CDs use very different recording technologies. For records the signal first undergoes pre-emphasis similar to that used in FM radio, where the higher frequency components of the signal are amplified. 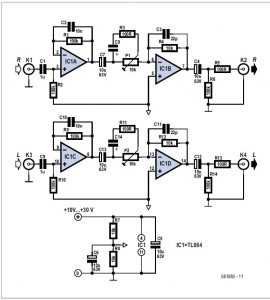 The resulting signal is cut into the lacquer master disc that will be used for pressing. Unlike CD manufacture, this is an entirely analogue process, and it introduces a phase shift into the signal. To compensate for the pre-emphasis the preamplifier in a record player includes a de-emphasis (or ‘RIAA’) filter which attenuates the higher frequency components. The purpose of pre-emphasis is to improve the overall signal-to-noise ratio of the signal as played back, reducing hiss and crackle. Deemphasis introduces further phase shifts, and as a result the final signal is rather different from that produced by a CD player. The processing involved in CD manufacture and playback can be entirely digital (in the case of ‘DDD’ recordings) and phase errors are reduced practically to zero. The circuit shown here uses a quad opamp (two opamps per channel) to produce ‘recordlike’ phase shifts. In the author’s experience low- and mid-range CD players tend to have greatly attenuated output at higher frequencies, and the circuit therefore also offers the facility to boost these components to taste. The value of capacitors C8 and C14 may be anywhere between 100 pF and 10 nF according to the frequency response desired. At the low-frequency end the response is more than adequate, thanks to the large coupling capacitors used.

The circuit also functions as a buffer or impedance converter, which can help to reduce the effect of cable capacitances. With CD players that have an output impedance of 1 kΩ or more the difference between cheap cables and more expensive low-capacitance cables can be noticeable. This circuit has an output impedance of just 100 Ω and so cheaper cables should normally be more than adequate. The circuit can of course also be used with other digital audio sources such as minidisc players, hard disk recorders, DAB tuners, digital terrestrial and satellite television receivers and so on. The supply voltage can be anywhere from 10 V to 30 V. It will often be possible to take power from the CD player’s own supply; if not, a separate AC power adaptor can be used. The output signal for each channel is inverted (i.e., is subjected to a 180 degree phase shift) by the second opamp (IC1.B and IC1.D). This does not affect the operation of the circuit. By changing the value of feedback resistors R4 (for IC1.B) and R12 (for IC1.D) the overall gain of the circuit can be adjusted so that the output level matches that of other components in the audio system. 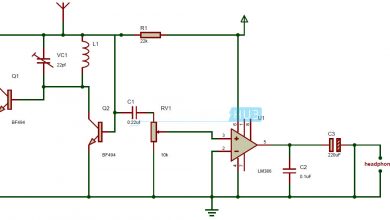 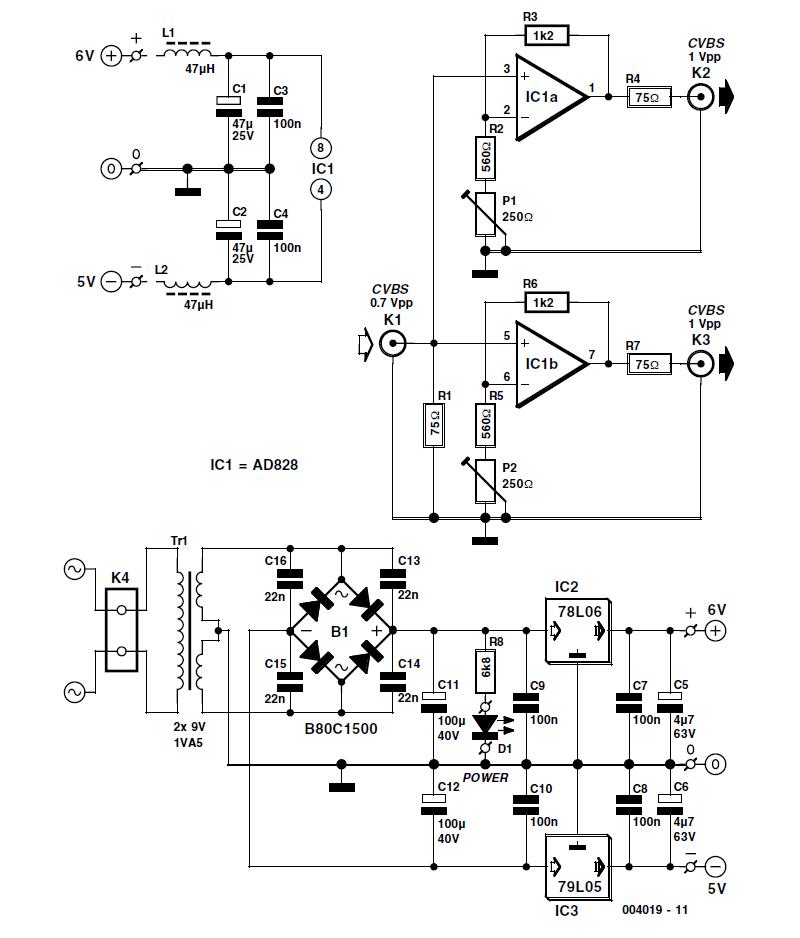 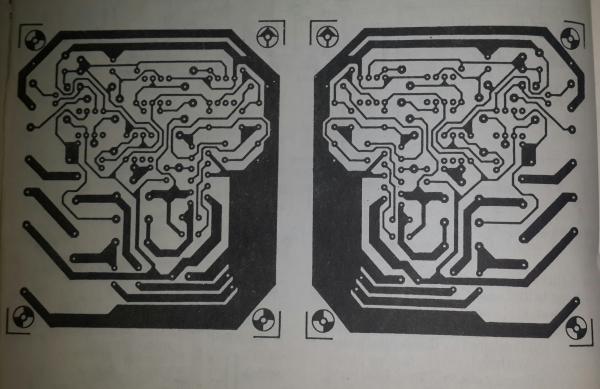