The author is the happy owner of a television set with built-in Ambilight lighting in the living room. Unfortunately, the television set in the bedroom lacks this feature. To make up for this, the author attached a small lamp to the wall to provide background lighting, This makes watching television a good deal more enjoyable, but it’s not the ideal solution. Although the TV set can be switched off with the remote control, you still have to get out of bed to switch off the lamp. Consequently, the author devised this auto matic lighting switch that switches the background. light on and off along with the TV set.

The entire circuit is fitted in series with the AC power cable of the TV set, so there’s no need to tinker with the set. It works as follows: R1 senses the current drawn by the TV set. It has a maximum value of 50 mA in standby mode, rising to around 500 mA when the set is operating. The voltage across R1 is limited by D5 during negative half-cycles and by D1–D4 during positive half-cycles. The voltage across these four diodes charges capacitor C1 via D6 during positive half-cycles. This voltage drives the internal LED of solid-state switch TRI1 via R2, which causes the internal triac to conduct and pass the mains voltage to the lamp. Diode D7 is not absolutely necessary, but it is recommended because the LED in the solid-state switch is not especially robust and cannot handle reverse polarization. Fuse F1 protects the solid-state switch against overloads. 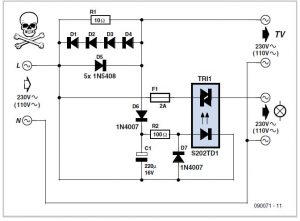 The value of used here (10 Ω) for resistor R1 works nicely with an 82-cm (32 inch) LCD screen. With smaller sets having lower power consumption, the value of R1 can be increased to 22 or 33 Ω, in which case you should use a 3-watt type. Avoid using an excessively high resistance, as otherwise TRI1 will switch on when the TV set is in standby mode. Some TV sets have a half-wave rectifier in the power supply, which places an unbalanced load on the AC power outlet. If the set only draws current on negative half-cycles, the circuit won’t work properly. In countries with reversible AC power plugs you can correct the problem by simply reversing the plug.

Compared with normal triacs, optically coupled solid-state relays have poor resistance to high switch-on currents (inrush currents). For this reason, you should be careful with older-model TV sets with picture tubes (due to demagnetization circuits). If the relay fails, it usually fails shorted, with the result that the TV background light remains on all the time. If you build this circuit on a piece of perfboard, you must remove all the copper next to conductors and components carrying mains voltage. Use PCB terminal blocks with a spacing of 7.5 mm. This way the separation between the connections on the solder side will also be 3 mm. If you fit the entire arrangement as a Class II device, all parts of the circuit at AC line potential must have a separation of at least 6 mm from any metal enclosure or electrically conductive exterior parts that can be touched. Local/national electrical safety regulations may dominate however. 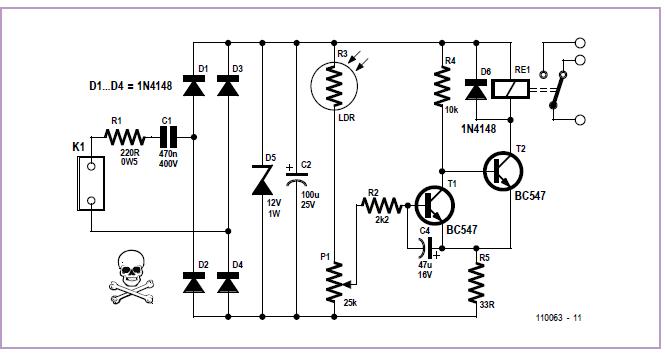 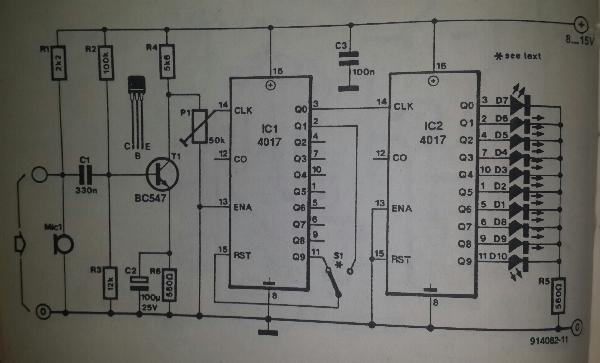