on: March 22, 2018In: Lights and Display Board CircuitsNo Comments
Print Email

The delay circuit ensures that a car’s interior light remains on for about five seconds after all the doors have been closed. This enables the ignition lock to be found easily in the dark (many modern cars have an illuminated ignition lock as standard).

When one of the front doors of the car is opened. the door switch (here, S1) closes. A current will then flow through interior light L1 via S1 and D2. At the same time, capacitor C1 is charged rapidly via R1, D1, and S1. When the door is closed, S1 opens. At the same instant. T1 is switched on by the low level at the -ve terminal of C1. After a little while, depending on the value of C1 and the base current of T1, the base voltage of T1 has risen to a level, where the transistor to conduct, so that 1 goes out.

Note. In quite a few modern cars, the circuit described for one like it is a standard fitting. (Editor.) 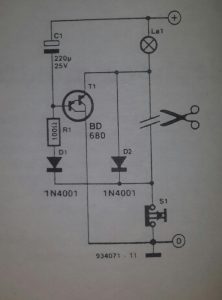 Pulse width modulation (PWM) is ad ideal for controlling small electric PCB drills that draw currents of up to 2...