Current: The amount of load flowing per unit time over a section. It consists of the movement of electrically charged particles (electrons).

Measurement is critical for circuit designers, and the current is always a painful value.

Returning to our primary school years; In voltmeters measuring voltage, the internal resistance is infinite, so that any current in the circuit does not flow from our voltmeter, so the effect on the circuit is considered zero.
In ammeters used to measure current, internal resistance is considered zero. In this way, the ammeter circuit does not act as a loader.

But in reality it is not possible to catch infinite resistance nor zero internal resistance. This is the biggest problem in our measurements. However, it is sufficient to start with the assumptions that these problems are overcome today.

In many industrial applications, there are two very preferred methods for current measurement, the first one is the shunt resistance method and the other is the use of hall effect sensors.

This method is very preferred and the method is the least cost. In short, according to the load in the circuit is a relatively small and negligible resistance, the current is read by the voltage proportional to the current, is the process of measuring the current. There are three problems that arise here;

– The value of shunt resistance should be affected by environmental factors such as thermal changes.
– The temperature effect of I ^ 2R losses should be considered.
– The small volt range, which consists of a small resistance value selection, must be able to be measured.

When looking at various electronic reception sites, it can be seen that shunt resistances usually have very low value changes, such as temperature and humidity. This is of great importance when the shunt resistance value of our reference point is not changed.

The temperature, ie the resistance of the resistance, also has a restrictive effect on the design. In particular, efficiency of the circuits such as inverters, converters, and the resulting loss of efficiency in the system design at some point may be difficult.

Another problem is the reading of very small voltage level due to small resistance and small currents. Especially the opamps that we use to increase this voltage level are different from the general usage opamps and they attract attention with their low input offset values. In electronic component acquisition sites such as Digikey, Farnell, the term op current measurement inde in the selection of opamps is particularly due to such effects.

Shunt resistance measurement is divided into two as High-Side and Low-Side. 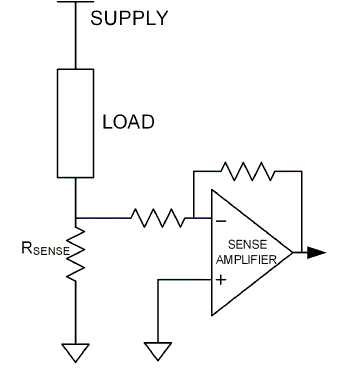 Below is an application made with this method. In the application load 1 1, the shunt resistance value is 1mΩ. The amplifier shunt strengthened the voltage on the resistor by 100 times, and finally the current flowing through the circuit was found with a doubler (representing the coefficient we used in this software). At this point it can be seen that 100uV will be applied to the entrance of the opamp as it passes through the circuit by 0.1A. When this current value is to be measured, it is necessary to use opamp with low offset. Otherwise, the reading value will be very different from the value to be measured. 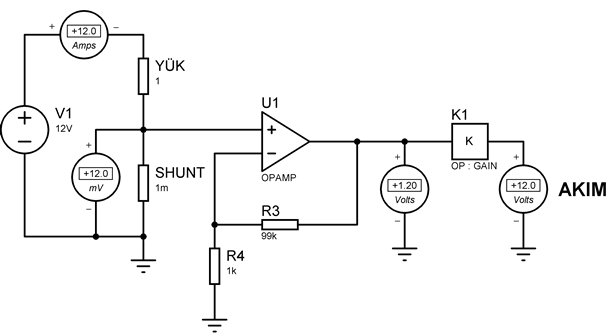 Shunt resistance does not need to be connected to ground as seen on the side in the High-Side measurement technique. Only the differential amplifier is used in the amplifier section. Thus, any current at any point in the circuit can be read easily. The only problem here is that the amplifier is a little more complicated than the low-side.

A current value measured using this method is shown below. The difference between Low-Side is immediately visible; in this structure the shunt is not connected to the ground. For the amplifier, more elements were spent. This structure alone allows us to measure current points separately. Again, the low opamp input offset value is an important factor. 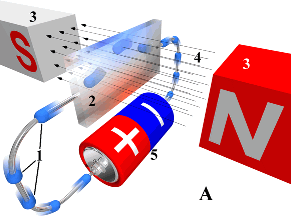 In short, the Hall effect is the voltage difference that occurs in a conductor that is flowing through it. Usually this difference occurs with the effect of magnetic field. This is because the magnetic field forces the electrons in one direction, that is, creating the force to create force. The effect of this can be easily seen in the picture.

In this method, the current value that we want to read is passed through any material and magnetic flux is formed. This structure can be a toroid. Then a hall sensor measures the amount of this flux and gives us a voltage amount. Since the amount of flux formed changes linearly with the current, a linear voltage is generated at the output.

Below is an example of the ACS755. As seen in this example, the hall effect sensor can be connected to the desired point. Although prices are extreme, they are frequently preferred in medical field due to their accuracy.

The measurement process, as always, is quite troublesome about this issue. Especially when the AC current reading and the filters enter the work and the high current values ​​are tried to be read, the number of hair is not reduced. To overcome such problems, integrated manufacturers offer pretty good solutions. Of course, all of this is due to the quality of the increase in the quality of money, the price / performance ratio of the solution to the best solution we will be the number one problem engineers.

At the end of the writing, I wish everyone success in their work by noting that although I do not handle it, I can also measure the current with the current transformer.

4 bc639 transistors are used in fan speed control circuit and speed can be adjusted with 47k trimpot on the...