The circuit’s premise is quite straightforward. I’ve linked an LDR and a light source to detect the presence of a letter in the box. Light Dependent Resistor (LDR) is a type of resistor whose resistance varies depending on the amount of light falling on it.

The LDR’s resistance is around 2 Mega Ohm in low light or dark settings, but it drops to a few tens of Ohms under high light. In this circuit, the light source (an LED) is set with the LDR in such a way that the light from the LED falls directly on the LDR, and any letter placed inside the letter box would obscure the light.

This change is detected with the help of a supporting circuitry consisting of 741 Op-Amp and CD4001 (Quad NOR Gate IC) and an LED is used to indicate the presence of a letter.

The circuit diagram of the Electronic Letter Box Project is shown in the following image.

If the connections with respect to the Quad NOR Gate IC CD4001 is not clear, then the following image might be useful.

This circuit will emit a visual warning whenever someone drops a letter in your mail box. The circuit’s essential building blocks are the operational amplifier LM741, the Quad NOR Gate IC CD4001, and the LDR.

This circuit is relatively simple to operate. The LDR and the LED should be placed in opposite corners of the box such that the light from the LED falls on the LDR on a regular basis. The output of the OP-Amp LM741 will be HIGH as a result.

This high signal is given to Pin1 of CD4001, which is basically a NOR gate and it produces output as 1 when all the inputs are at low state (which you can find in the truth table). So, the LED will keep on glowing point out that there is no letter in the drop box.

Light falling on the LDR is stopped as soon as a letter is dropped in the box, and its resistance rises to a high level. As a result, the Op-output Amp’s becomes low. Pin 1 of CD4001 receives this LOW signal. We’ll get Logic 0 in output Pin 3 as a result of this.

Continuing in this manner, the output at Pin 11 will eventually go HIGH, and the LED will stop glowing as a signal that there is a letter in the letter box. 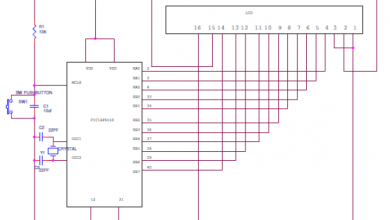