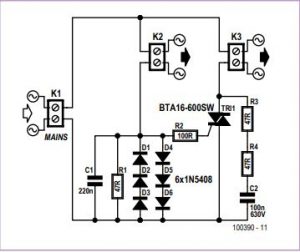 Capacitor C1 reduces the sensitivity of the circuit to spikes. To avoid premature switching due to power drawn by an AC line filter, stand-by operation or the like, R1 can be used to raise the threshold level. It will be approximately 10 watts with a 47 Ω resistor, but this is strongly dependent on the characteristics of the triac and the waveform of the load current. If the current is not sinusoidal or R1 is too small, the triac will trigger later and may not be able to supply sufficient power to K3, in which case the circuit will act as a sort of dimmer.

Be careful when modifying the value of R1. Remember that the entire circuit is at AC line potential. Unplug everything before working on the circuit.

The combination of C2, R3 and R4 forms a snubber network that suppresses switching spikes, such as are produced by inductive loads.

We selected an ST triac that can handle more current than the TIC225 used in the original circuit, but which still has a reasonably low trigger current. The BTA16-600SW is rated for 16 A continuous or 160 A peak. Here the suffix ‘SW’ is especially significant. This is what is called a ‘logic level’ triac, with a maximum trigger current requirement of only 10 mA, symmetric in quadrants I and III. This is not true of the TIC225. If the trigger sensitivity is not the same in both quadrants and the trigger conditions are marginal, the triac may trigger in only one quadrant. This results in rectification, which most equipment cannot handle. At the minimum, this will cause fuses to blow.

The resistance of the snubber network consists of two resistors connected in series (R3 and R4). Standard resistors are often not suitable for use at AC grid voltages. Over the longer term, spikes can also cause resistor failure, which leads to triac failure.

Pay attention to the maximum load current. The triac can handle around 1 A without cooling, but at this level, it is actually too hot already. Fit a small heatsink if the current through the triac will be more than 0.5 A. The maximum allowable triac junction temperature is 125 °C, but in practice, it’s better to work on the basis of 70 °C, since high temperatures shorten the life of semiconductor devices.

The circuit is very compact and can probably be built into the power distribution bar. 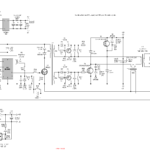 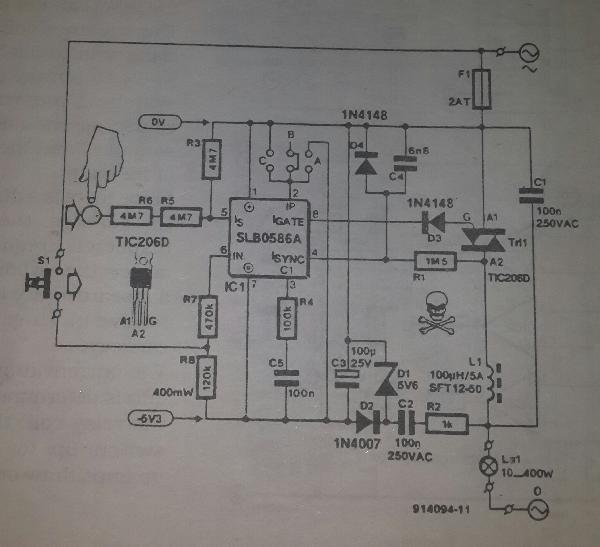