on: January 18, 2020In: LCD-LED Display, Lights and Display Board CircuitsNo Comments
Print Email

A simple example of a police flasher application. A circuit based on the 5517 generating frequency and the 4017 integrator counting 10 lu at the output frequency. You have seen the same many times in the fiddle. In this application, the 4017 outputs were intended to be powered by the BD135 to drive 3W power LEDs. No cooling is required for BD135s.

The power LEDs are mounted on the soldering copper surface for cooling purposes. The round metal part at the back of the power LEDs is connected to the led + pole. Before the power LEDs are soldered, the rounded back part is more beneficial in terms of heat transfer if a thin layer thermal paste is used. 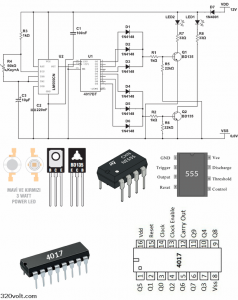 By choosing blue and black power led, we are doing the job in a short way. You can also use your preference in different colors. If you want to use 12V strip LED instead of Power LED, you only need to put one wire bridge instead of 33 ohm 1W resistors. Instead of the 50K trimpot connected to the 6th and 7th legs of the 555, you can solder a single resistor, which you have previously set, to reduce the cost, but this will deprive the setting of the circuit and keep the flashing rate constant. Without the trimmer, I caught the flash speed of the video with a constant resistance of 6.8 Kohm. 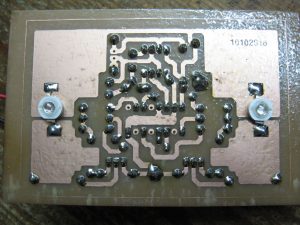 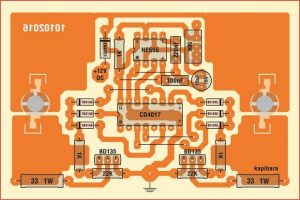