Designs for good-quality headphone amplifiers abound, but this one has a few special features that make it stand out from the crowd. We start with a reasonably conventional input stage in the form of a differential amplifier constructed from dual FET T2/T3. A particular point here is that in the drain of T3, where the amplified signal appears, we do not have a conventional current source or a simple resistor. T1 does indeed form a current source, but the signal is coupled out to the base of T5 not from the drain of T3 but from the source of T1. Notwithstanding the action of the current source this is a low impedance point for AC signals in the differential amplifier.

Measurements show that this trick by itself results in a reduction in harmonic distortion to considerably less than –80 dB (much less than 0.01 %) at 1 kHz. T5 is connected as an emitter follower and provides a low impedance drive to the gate of T6: the gate capacitance of HEXFETs is far from negligible. IC1, a voltage regulator configured as a current sink, is in the load of T6. The quiescent current of 62 mA (determined by R11) is suitable for an output power of 60 mWeff into an impedance of 32 Ω, a value typical of high-quality headphones, which provides plenty of volume. Using higher-impedance headphones, say of 300 Ω, considerably more than 100 mW can be achieved. 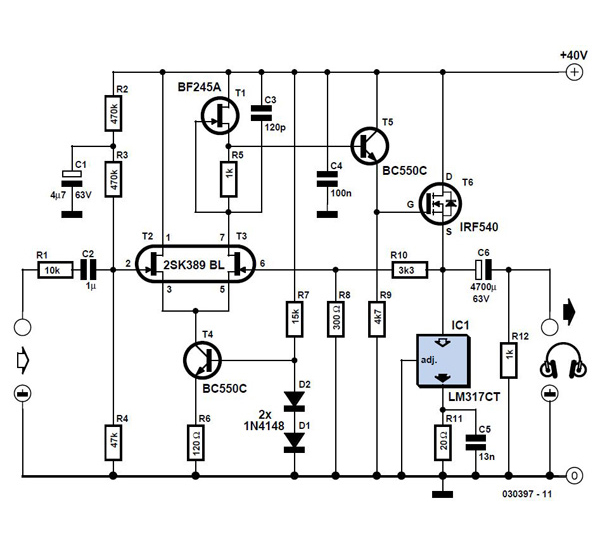 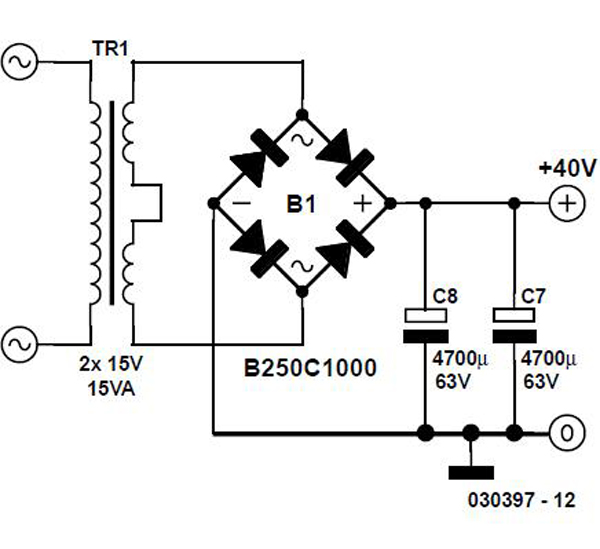 The gain is set to a useful 21 dB (a factor of 11) by the negative feedback circuit involving R10 and R8. It is not straightforward to change the gain because of the single-sided supply: this voltage divider also affects the operating point of the amplifier. The advantage is that excellent audio quality can be achieved even using a simple unregulated mains supply. Given the relatively low power output the power supply is considerably overspecified. Noise and hum thus remain more than 90 dB below the signal (less than 0.003 %), and the supply can also power two amplifiers for stereo operation. The bandwidth achievable with this design is from 5 Hz to 300 kHz into 300 Ω, with an output voltage of 10 Vpp. The damping factor is greater than 800 between 100 Hz and 10 kHz. A couple of further things to note: somewhat better DC stability can be achieved by replacing D1 and D2 by low-current red LEDs (connected with the right polarity!). R12 prevents a click from the discharge of C6 when headphones are plugged in after power is applied.

T6 and IC1 dissipate about 1.2 W of power each as heat, and so cooling is needed. For low impedance headphones the current through IC1 should be increased. To deliver 100 mW into 8 Ω, around 160 mA is required, and R11 will need to be 7.8 Ω (use two 15 Ω resistors in parallel). To keep heat dissipation to a reasonable level, it is recommended to reduce the power supply voltage to around 18 V (using a transformer with two 6 V secondaries). This also means an adjustment to the operating point of the amplifier: we will need about 9 V between the positive end of C6 and ground. R4 should be changed to 100 Ω, and R8 to 680 Ω. The gain will now be approximately 6 (15 dB). The final dot on the ‘i’ is to increase C7 by connecting another 4700 μF electrolytic in parallel with it, since an 8 Ω load will draw higher currents. 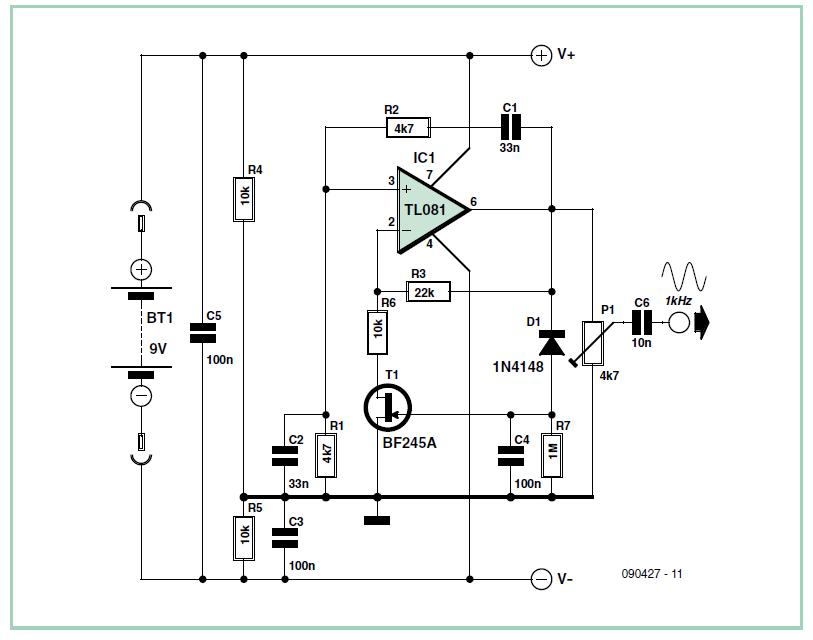 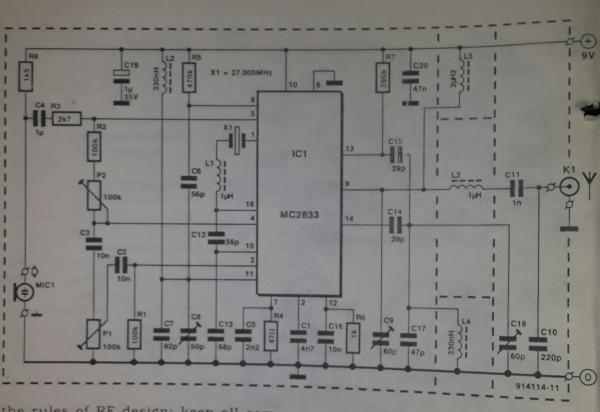 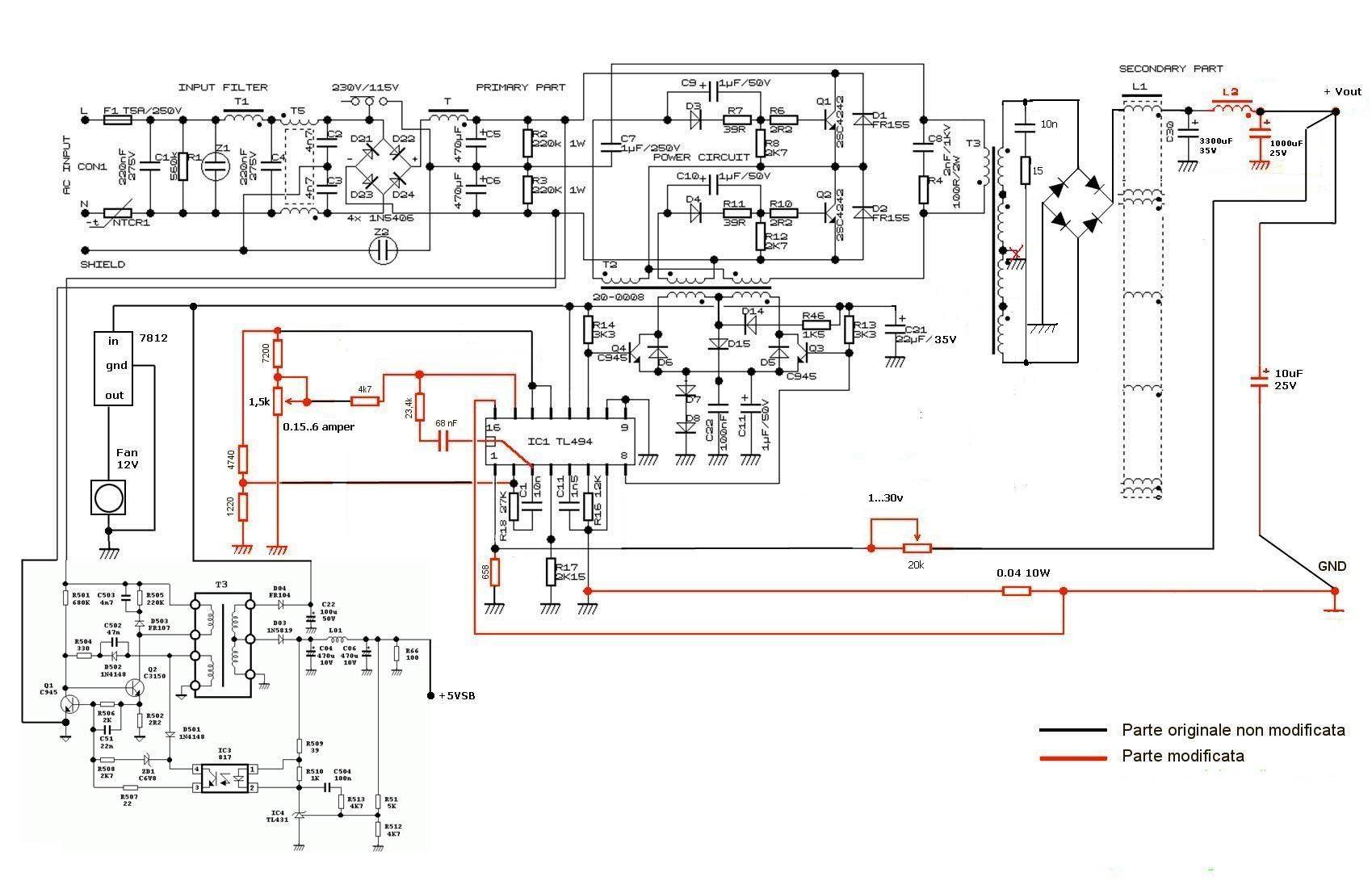