Electromagnetic field generated by a small current is called an element relay that controls one or more key groups (switches on or off) to operate a switch operating at high power or current . The thermal relays mentioned below should be excluded from this description. In summary, small currents and voltages provide greater current and voltage control. At the same time, relays are able to control electrical and electronic circuits of many different characteristics by switching without being affected by different frequencies and wave types.

The relays which are used after the manufacture of thyristors and triacs based on the semiconductor principle are still used in applications requiring very high current and voltage control. The advantage over the thyristor and triacs is that a single relay can have more than one load open or close at the same time because it can have more than one switch or contact in it, or even open some loads and close some loads at the same time. This process is completely related to the way the contacts are connected.

The relays must be used in some air and liquid control systems where electronic circuits can not enter ( high temperature, humidity or liquid media, etc. ). The problems encountered in relay applications can be summarized as follows. It will malfunction because it works mechanically. Because the contacts are constantly sticking to each other, the resulting electrical jumps cause the contacts to lose their oxidation and transmission over time. The transmission time is longer. It is also unpleasant to hear that the contacts were pulled out.

The coils of the relays which are fed with voltage between 5V-48V generally draw current between 5mA-150mA. The contacts can be based on current values ​​between 0.5A and 70A. In the application circuits, it is easy to ensure that the coil supply voltage range is wide. It is provided with both logic and analog circuits. When controlling high-current circuits, the heating that can be generated by the current through the contacts requires the use of contactors instead of relays in these circuits. 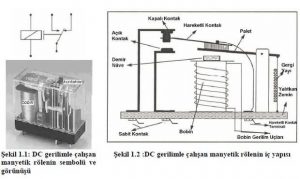 Relay Construction and Operation: The structure and operation of the relays vary according to the type. When describing the relay types, it will be mentioned about the operation and structure of each type. However, in general, it can be said that the contacts are replaced by an effect ( current, voltage, heat, magnetic field, etc. ) for all relays and a circuit is controlled by making use of this change.

Relay Variations: The relays can be varied as magnetic relays, tongue contacts, thermal relays, overcurrent protection relays. The relay type must be selected according to the circuit used. For example, overcurrent protection relays can be used to tie the tongue contact if the switch is to be switched on by the magnetic effect and to limit the high current. We will examine the relay types in more detail below.

A current passing through a conductive wire covered with an insulated surface wrapped around an iron rod creates a magnetic field that draws nearby metals toward itself. Magnetic relays are manufactured using this feature. 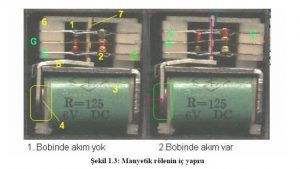 Magnetic relays are made up of three basic parts. These are relay bobbins, relay contacts and pallet. The coil consists of a plurality of wrapped conductive strands (indicated by 3) on a plastic sheath on an iron core (denoted by 4) fabricated in the form of a cylindrical or rectangular prism. The pallet (denoted by 5) is a soft iron piece that is activated by the magnetic field of the coil. The reason why soft iron is chosen as core is that it easily lost its property at the same time it acquires easy magnetic field. At the point where the pallet touches the contacts, there is an insulator called fiber (indicated by 7). When there is no magnetic field, it is held back by a spring. The contacts (denoted by 1 and 2) are good conductive materials that allow current to flow when they are in contact with each other.

The coil and core work like an electromagnet. When tension is applied to the coil ends, it creates a magnetic field and pulls the pallet towards itself (the pallet in the yellow ring is released and the pallet in the green ring is pulled toward the core ). The pallet opens with normally closed contacts (indicated by red rings in the left part of the figure) as a result of this movement. If a load is connected to the ends of these contacts, it will stop working. The normally open contacts ( shown by the red rings on the right side of the figure ) will close and the load connected to these contact leads will work. Also note the change of the current path indicated by G (current input) and O (current output).

It can be classified according to the number of contacts and cesidine on the magnetic relays. There is only one key on a single-contact, single-position relay, and there is no other key that works in reverse. It only helps to open and close a burden. If the single contact is dual position relays, the position change of the switch on it stops the other while operating a final load. Similarly, the number of parallel contacts running at the relay can be increased to achieve multi-contact relays. Figure 1.3 shows the internal structure of the relay relay with two contacts and a dual position. 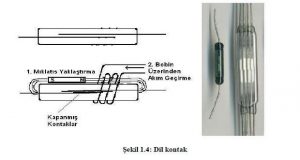 It is a type of relay that opens or closes contacts according to the temperature change in the environment. Thermic relays are often used with the aim of stopping overheating motors during operation or preventing further heating at the appropriate heat level in heat generating devices such as ironing machines and hair driers.

By means of a special metal compound called a bimetal in the thermal relays, the heat of the environment cuts the current flowing above the specified heat value. The metal is composed of two metals exhibiting different expansion under heat. One of the metals expands rapidly and excessively while the other expands slightly, the metal composition is tilted in one direction to convert heat energy into motion energy. This movement is used to close the energy contacts.Termic relays can be in many different structures. In the thermal relays used in the motor control circuits, there is a chrome-nickel heater that provides heating, The thermal relays used in the devices use the heat inside the device and only the bi-metal and contacts are present. 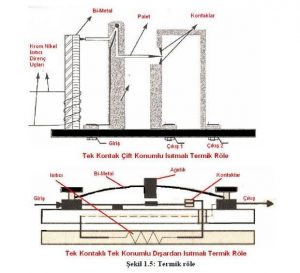 The internal structure of these two different thermal relays is given in Fig. In the first relay, it biases the metal on the pallet with the effect of heat of the metal to move the contacts. In the second relay, the effect of the bi-metal weight relaxed by the heat effect causes the contact to be opened by falling on the contact.

The overcurrent relays connected to the three phase conductors only control one relay in one phase alternating current circuits and the three phase conductors control the normally closed contact in the control circuit. In the overcurrent relays, the current is set by the adjusting screw on the relay. The current is set within certain limits according to rated currents of the motors. 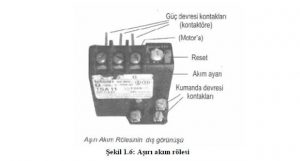 The overcurrent relays are connected in series to the load circuit and the load current is passed through. The load is not damaged during short-time overcurrents caused by a temporary fault or at the time of starting and it is desired that the circuit is not switched on. In this, the opening of the relay is prevented by a delaying system

Over current relays are divided into two according to the structures. These:

LED flashing: With the circuit shown in Figure 1.7, Led1 can be switched off by relay and button control. Since the normally closed contact is empty, the led is off when there is no voltage at the relay coil ends. The blue path can not be used. When the button is depressed, the current flowing through the current path indicated by pink is passed over the coil, allowing the position of the contact leads to be changed and it is possible to use the blue current path. Then the led lights up. 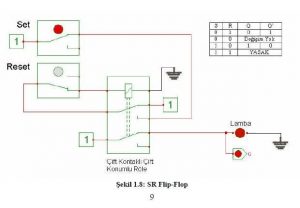 Sealing cycle: A cycle that controls the start and stop of a load by two buttons is called a sealing cycle. The basic operating logic of the sealing circuits is based on relaying the coil supply voltage via the relay contacts. 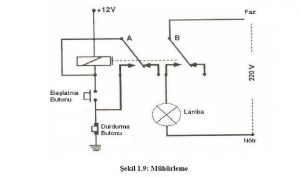 Starting with the sealing circuit shown in Figure 1.9, even when the button is pressed for a moment, the pallets marked A and B are displaced as the relay coil is energized. The start button is deactivated and the coil energy is started to be met through the pallet A and the sealing (in the sense of fixing) takes place. The load on the B pallet starts to work. It is enough to press the stop button for a moment to open the seal. In this case, pallets change position and load and coil energies are cut off.

Door Circuits: Various door circuits can be made by controlling the current flow with the relays. The example circuits are given below. 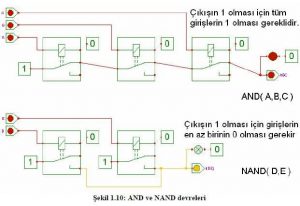 In the three relays given in Figure 1.10, if the bobbins are energized, they will draw their pallets to them and the current at the output will reach the current. If no energy is present in any of the coils ( any one of the inputs A, B, C is reset ) the current will remain at one of the unconnected contacts. In the Nand circuit shown in Figure 1.10, if the coil voltage of any relay is disconnected, current will flow through the normally closed contact.

In the Or circuit shown in Figure 1.11, one of the relays to which the inputs A, B, C are connected ensures that the bobbin’s energy is lit by the output lamp, that is, the output is logic 1. Nor works as the opposite of the Or circuit. 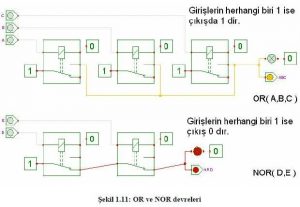 In the application circuit shown in Figure 1.13, the current through the conductive wires wound on the tongue contacts, shown by RL1 and RL2, allows the right and left headlights to emit. At the same time, this current creates a magnetic field on the tongue contact and allows the tongue contacts to close the contacts, allowing the LEDs LD1 and LD2 to illuminate. These LEDs are mounted on the instrument panel in vehicles and show that the vehicle headlights are emitting radiation. If there is a problem (such as a lamp burst or line break), the flow of current will be interrupted and the contacts of the tongue-eye will be separated from each other, causing the LEDs to go off. So the driver will know that the headlights are not lit.

In general, there are certain codes for single and double contacts, all of them have some codes and there are symbols that show where there are many ratios in the plastic outer box where the contacts are closed, ie not energized.

Various control circuits can be made according to relay power with single and double contact relays. In the following example diagrams, various applications are shown and many applications can be done according to the operating voltage, power, number of contacts, animated gif relay.

one with a contact relay and one with a led indicator and the other can be used to control the motor when there is no power at the relay, the green LED lights up when the energy is supplied, the motor stops and the red LED lights up the lamp runs

or engine, we can use it for fan direction change 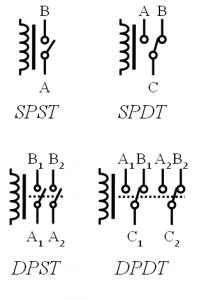 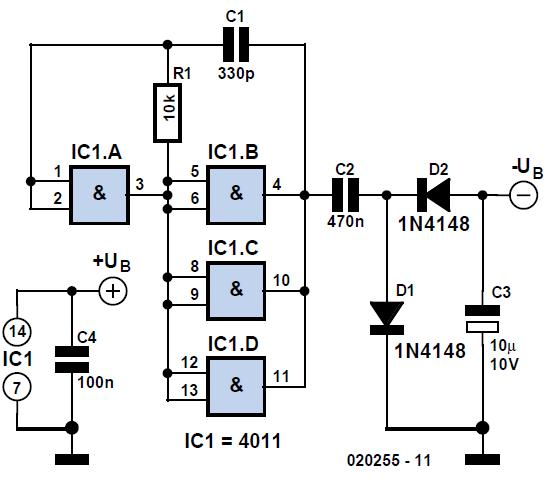 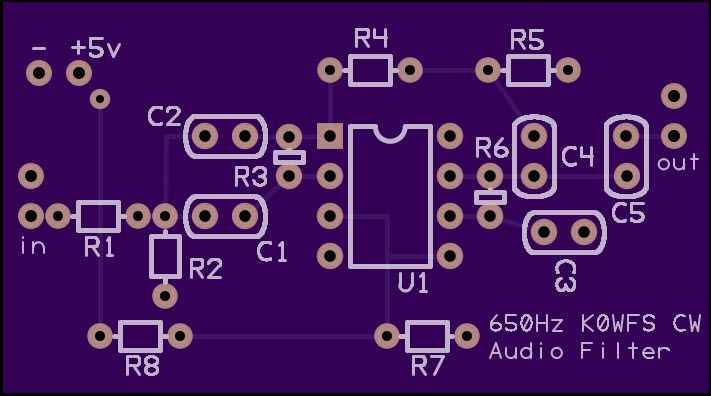 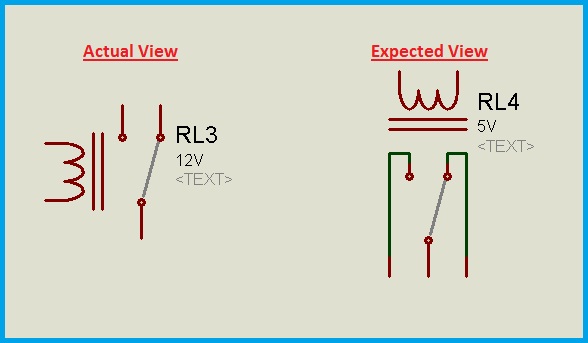 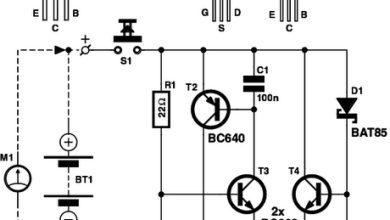