A fire alarm circuit is a simple circuit that detects a fire and sounds a siren or activates a buzzer. Fire Alarm Circuits are critical equipment for detecting fires in a timely manner and preventing harm to persons and property.

Security systems include fire alarm circuits and smoke sensors, which aid in the detection and prevention of harm. It is mandatory to install fire alarm systems and smoke detectors in commercial buildings such as offices, movie theatres, shopping malls, and other public locations.

There are many expensive and sophisticated Fire Alarm Circuits available as stand-alone devices, however we created five extremely easy Fire Alarm Circuits utilising common components such as the Thermistor, LM358, Germanium Diode, LM341, and NE555.

In the next sections, we’ll look at all of these circuits, their circuit layouts, the components needed for each circuit, and how each circuit works.

This is a very simple alarm circuit using Thermistor, LM358 Operational – Amplifier and a Buzzer.

The circuit diagram of this simple Fire Alarm Project is shown in the following image.

A Dual Operational Amplifier (Op – Amp) IC is the LM358. The LM358 IC can be used to implement all of the functional modes of a standard operational amplifier. However, in this project, we’ll use the LM358 Operational Amplifier in Comparator Mode, which compares input signals on inverting and non-inverting terminals and produces appropriate output.

The Fire Alarm Circuit with Siren Sound has a very simple design. Connect the 10 K Potentiometer to the LM358 Op – Amp’s inverting terminal first. The wiper terminal is linked to Pin 2 of the Op – Amp, while one end of the POT is attached to +5V and the other end is connected to GND.

We’ll now use a 10 K Thermistor and a 10 K Resistor to create a potential divider. The junction point, or output, of this potential divider is connected to the non-inverting input of the LM358 Operational Amplifier.

We have chosen a small, 5V buzzer in this project to make the alarm or siren sound. So, connect the output of the LM358 Op – amp to the 5V Buzzer directly.

We’ll now look at how a simple fire alarm circuit works. The first thing to know is that the 10 K Thermistor is the most important component in detecting the fire. The 10 K Thermistor utilised here is an NTC type Thermistor, as stated in the component description. The resistance of the Thermistor reduces as the temperature rises.

The temperature rises in the event of a fire. The 10 K Thermistor’s resistance will decrease as the temperature rises. The voltage divider’s output will grow as the resistance decreases. Because the voltage divider’s output is connected to the LM358 Op – Amp’s non-inverting input, its value will be greater than that of the inverting input. As a result, the Op – Amp’s output rises, causing the buzzer to sound.

When there is a fire mishap at home, this circuit sounds a siren to inform us. You may have seen fire alarms before, but this one is unique in that it produces a siren sound rather than a buzzer, and it does so with simple components.

We are aware that many integrated circuits can be used to generate the siren effect, but we prefer to use basic electronics components such as resistors, capacitors, and transistors to generate it so that you can clearly understand its internal workings and gain more knowledge by analysing it rather than relying on pre-designed in-circuit solutions.

This circuit uses a thermistor to sense the temperature. When it senses that the temperature of the environment is increasing above a given threshold, then it gives a signal. The temperature at which the circuit detects fire can be adjusted by using the potentiometer arrangement at VR1.

The potentiometer setup provides a high voltage when the temperature rises above the predetermined value. In common emitter mode, this voltage is then applied to the BC547 transistor. It’s an NPN transistor with a wide range of applications. When a high input is delivered to the base, it is turned on. As the collector to emitter voltage decreases when the transistor is turned on, the collector voltage is decreased to a low level. The first transistor’s collector output voltage is sent into the base of the second BC 547 NPN transistor.This transistor is also in common emitter mode, which means that when the temperature threshold is achieved, the output at the collector will grow rapidly. It will switch on the following transistor, BC107, in this state. The siren circuit’s transistor will now operate as a switch. This transistor can handle far more power than the BC547 and is supplied with a heat sink to do so.

When the BC107 transistor is turned on, current flows from the power source to the collector, acting as an electronically controlled switch. When the current is flowing, the siren circuit, which serves as the circuit’s load, is activated. The siren will thereafter be heard through the buzzer. The primary components in producing the siren effect are the capacitors employed in the circuit. The premise behind creating the siren effect is to create an oscillator with an envelope that grows and drops on a regular basis.

Here is another small project on fire alarm. When a fire accident is happened in home or office, it will detect the fire and give the alarm.

The thermistor is the principal component that detects a fire by detecting a sudden change in room temperature caused by the fire’s heat. The thermistor will detect heat and transmit the data to the LM741 OP-AMP. The op-amp causes the NE555 to emit a pulse, which is then sent to a buzzer.

LM741: The LM741 is an operational amplifier that operates based on the difference between two input voltages. High current driving, voltage gain, noise amplification, and low output impedance are all features of the LM741. The LM741 can also be used to defend against short circuits. 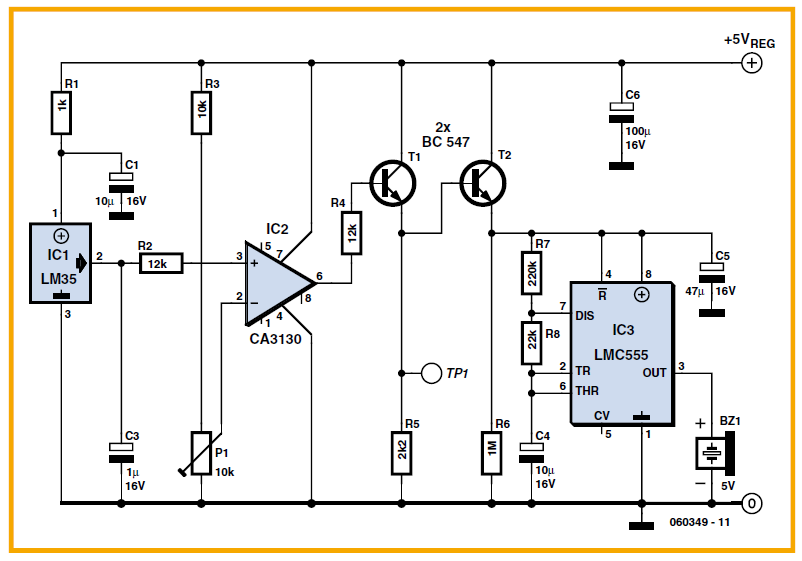 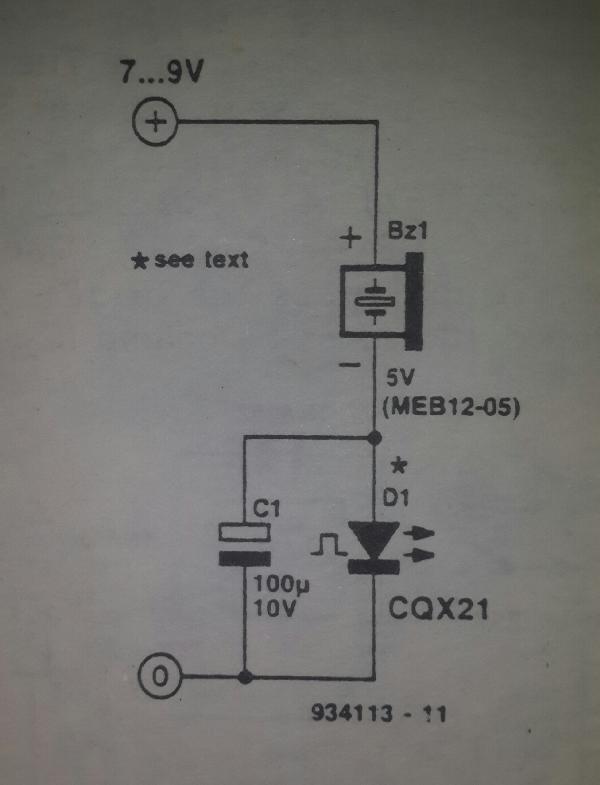 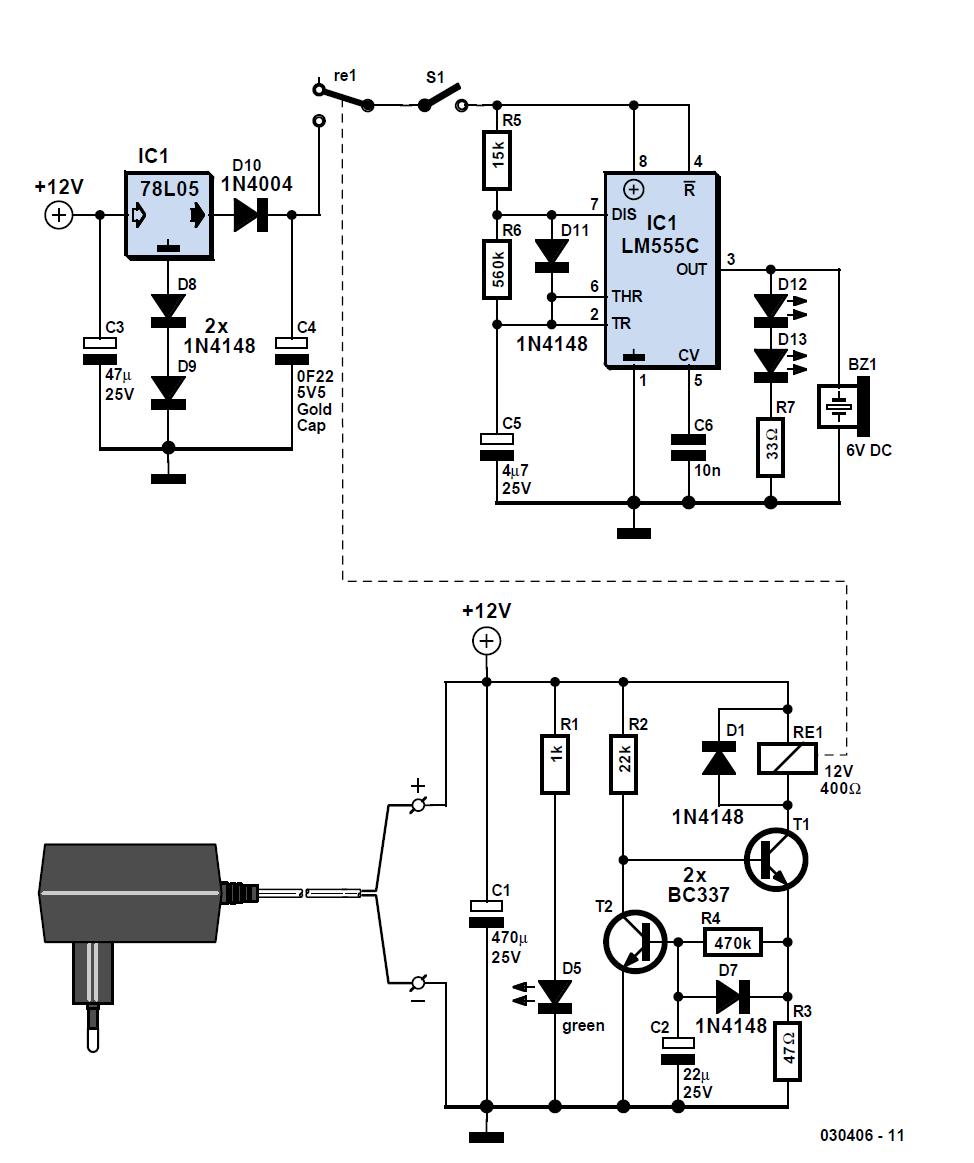