Power LEDs are becoming more and more commonplace as bedroom light sources for a number of reasons. The greatest advantage of LED light sources, in my opinion, is that they last for a very long time. They are also extremely low in heat emission; thus, we can run an LED light source for minutes to hours and it will still be cool to the touch, compared to a short run with an incandescent bulb causing mild to medium discomfort if touched. Below is the circuit of an inexpensive white LED driver for your next unique bedroom lamp. 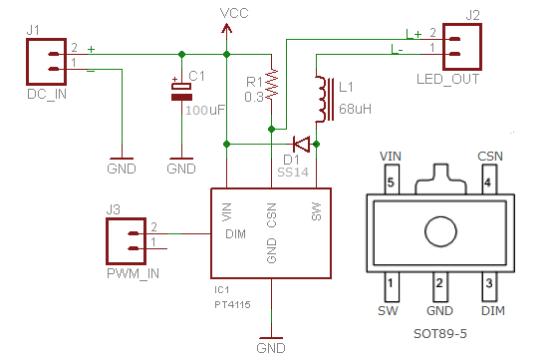 At the heart of the circuit is a constant current driver chip PT4115 (IC1) from PowTech (www.crpowtech.com). The PT4115, available in an SOT89-5 package, is, in fact, a continuous conduction mode inductive step-down converter designed for driving single- or multiple-series-connected LEDs efficiently from a voltage source higher than the total LED chain voltage. The device operates from an input supply between 6 and 30 V and provides an externally adjustable output current of up to 1.2 A. The chip also has a dedicated “dim” input, which accepts either a dc voltage or a wide range of pulsed dimming.

Here, the LED driver is designed to fit anywhere, and its output current is configured to about 300 mA. Less than the maximum current for 1-W white LEDs is deliberately selected to ensure the long life of LEDs. The circuitry is suitable for driving 1-W white LEDs up to four in series (tailored for 12- to 15-V power rails). The PCB should be designed so that the back of it is just a heatsink ground plane. During installation (after the construction), remember to glue the populated PCB with some silicone or heatsink compound to some aluminum bar or metal. However, it can work fine when driving 300 mA without a heatsink. Shown below is a good example of the recommended PCB layout (thanks to www.tindie.com). 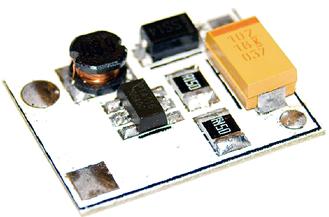 Fortunately, there’s an “Arduino way” to control the brightness of LEDs driven by the PT4115 chip through the pulse-width modulation (PWM) technique. Does it sound complicated? It isn’t. Here is a primer on PWM to help. Once you learn how to make one, you can easily try this not only on Arduino, but any other microcontroller that has PWM output as well.

When I write analogWrite(3, 255/2); the result is a square wave on pin 3 whose width was divided by 2. The full width will produce 5 V, so this wave will produce 2.5 V (see the oscillogram). 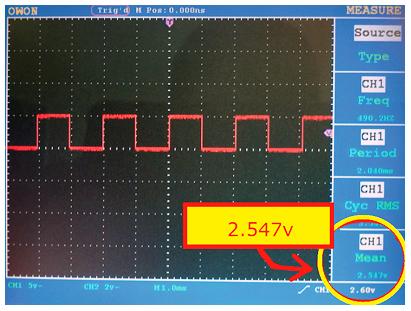 Most microprocessors permit us to change the modulation frequency for PWM pins. The Arduino has its own set default values. For pins 3, 9, 10, and 11, it is approximately 488 Hz. For pins 5 and 6, it is about 977 Hz. These values are for an Arduino running at the default 16 MHz. We can change these frequencies easily by writing new values to the appropriate timer register. For more details on setting timer frequencies, refer to this guide: http://www.arduino.cc/playground/Main/TimerPWMCheatsheet

Now load this simple code, connect a 10K potentiometer to the Arduino with the middle (wiper) terminal to pin 9, the first terminal to 5 V, and the last terminal to GND. Next, connect an oscilloscope to pin 3 of the Arduino and observe the PWM signal change when turning the 10K pot in clockwise and counterclockwise directions.

void loop()
{
val = analogRead(inPin); // read the potetntiometer input pin
volt =(5.0 * val) / 1023;
val = 255 * (volt / 5);
analogWrite(pwmPin, val);
}
Now that we understand how PWM works and can even change its frequency, it is time to start some experiments on how to implement a microcontroller for PWM dimming of LEDs with or without dedicated drivers. Such experiments are incredibly useful. If you have any questions about this article, please drop me a note in the comments. If you have any improvements, corrections, or additions, please let me know about them as well.

Finally, a word of caution: The PT4115 chip is prone to overvoltage/transient damage on the DIM (pin 3). So it’s better to protect the DIM pin with a voltage clamp, as shown here: 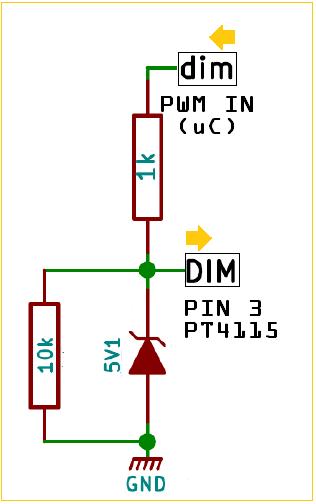 I am a big fan of the LV version of the Pololu mini pushbutton power switch (2808) that has now...