The object of this circuit turns the domestic lighting on and off in complete safety in a room with very high humidity. A detector, flush-mounted into the wall, detects the magnetic field variations caused by the proximity of a hand and controls an AC power switching system. Hence lighting control is achieved through the wall covering, with no exposed electrical equipment. 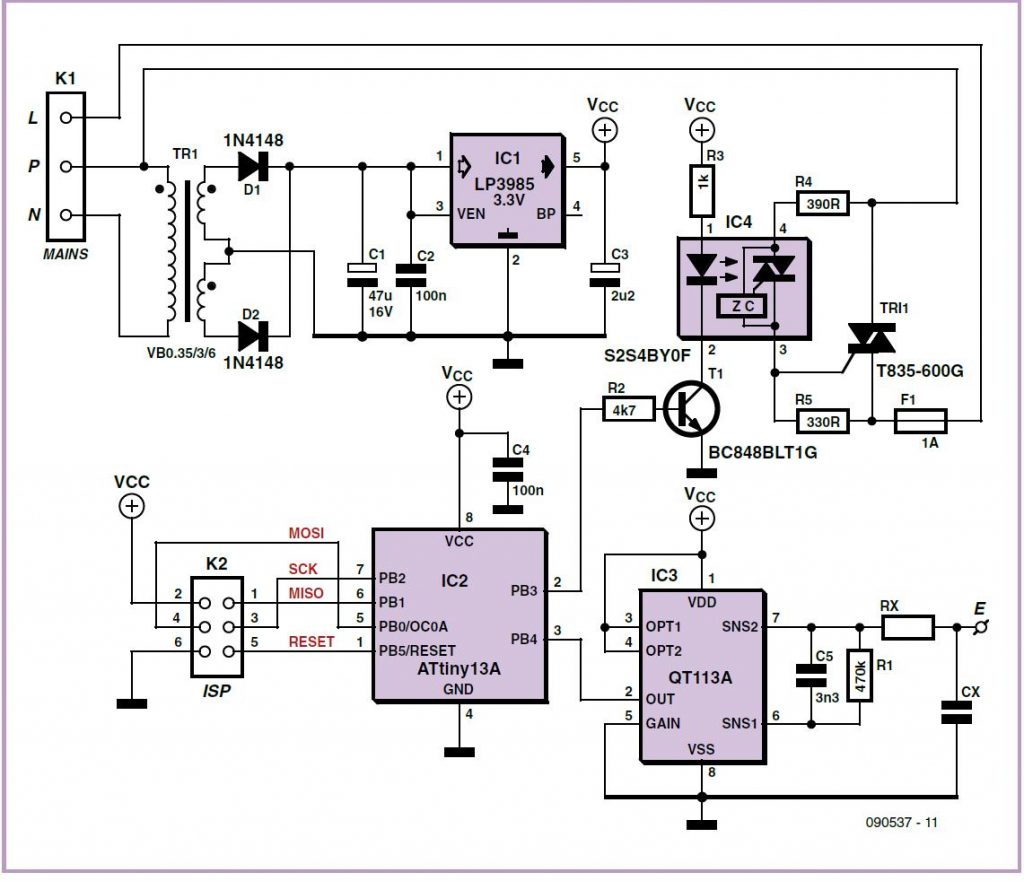 The operation is based around a specialized IC (IC3): the QT113A from Quantum (bought out a few months ago by Atmel). This IC generates a pulsed magnetic field while a capacitive measuring system detects the variations. Any variation in the magnetic field results in toggling of its output. A series of filters avoids errors, and detection has to be confirmed three times before the processor will toggle the output, which avoids unwanted triggering. IC3 has a self-calibration feature that enables it to adapt itself to variations in external conditions. The pulsed operation limits RF emissions as well as consumption. The electrode is formed from a piece of copper-clad PCB board of around 5 × 5 cm, which has had the photosensitive film removed to allow a wire to be soldered on for connecting it to the electronics board. The electrode must be kept a few centimeters away from the electronics board, otherwise, it won’t work; this prevents you from being able to use a double-sided PCB with one side carrying SMD components and the other side acting as the electrode. The value of capacitor C1 will determine the sensitivity of the detector, and its value will need to be adjusted depending on the environment and the sensitivity required.

IC3’s output provides an oscillating signal that enables it to prove it is working, which means we have to use a small controller which will register the information provided by the detector and handle the load switching via an opto-triac and a triac. A standard ISP connector is available for programming the microcontroller. A miniature transformer makes it possible to include a small 5 V PSU on the board and isolate the circuit from the AC power line. Isolation between the output and the AC is ensured by an opto-triac, but it’s important to remember that one part of the circuit is connected to live AC voltage.

All the components are SMD types but are still easy enough to solder using a conventional iron. The PCB can be fitted into an electrical back-box (e.g. Legrand Beatbox) in the bathroom, for example, behind a tile. All you have to do to turn the light on or off is touch this tile with your finger. 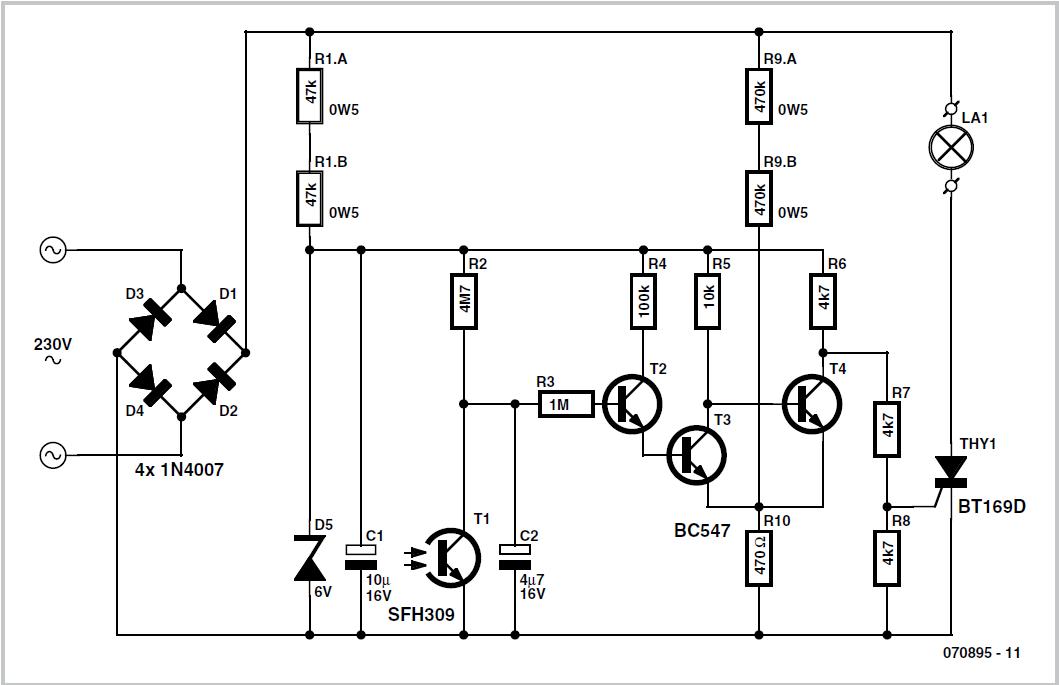 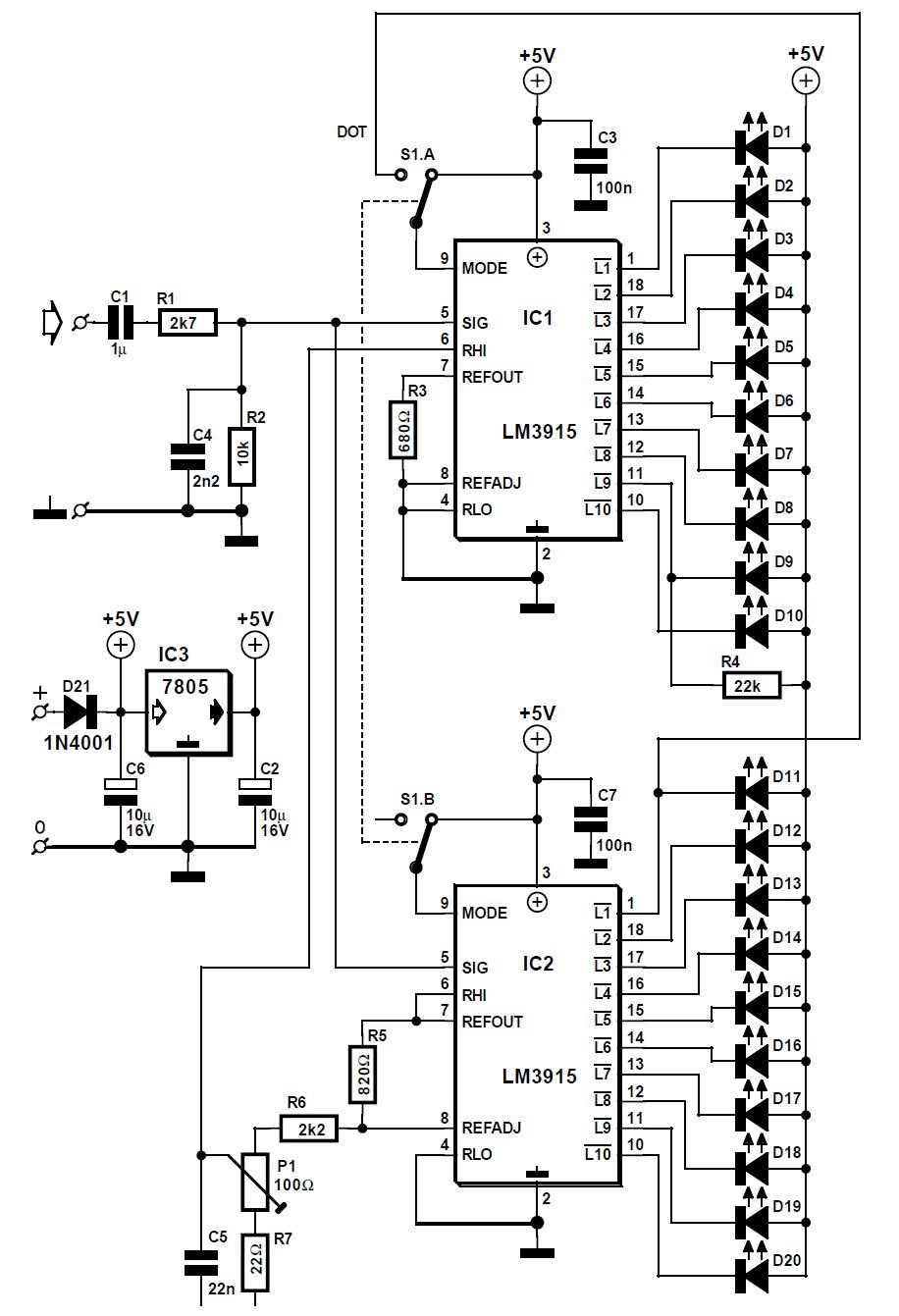 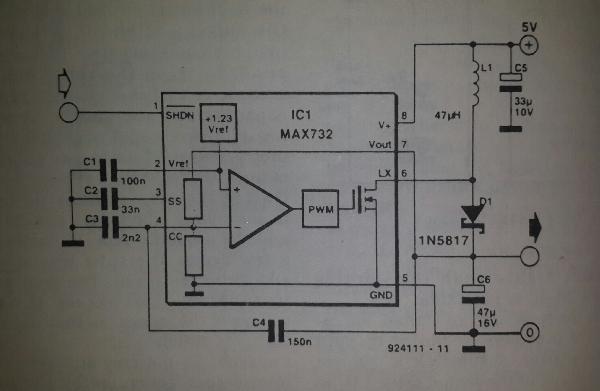 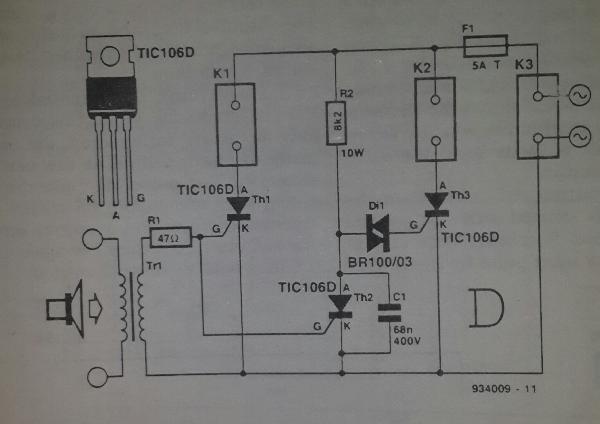