Here are two circuits that make it possible to add up to eight detectors to an existing alarm system without running a single cable. Each transmitter has a unique number that is reported to the central unit in the event of an alarm, and the transmitter battery condition is monitored. Transmissions between the transmitters and the central unit are coded and are in one of the two ISM frequency bands: 433.92 MHz (US: 315 MHz) or 868 MHz (US: 915 MHz). The transmitter circuit (Figure 1) does not include the actual radio transmitter, as it is compatible with any UHF radio transmitter module with a binary input. The heart of the circuit (IC1) is a digital data coder. It outputs from its DOUT pin a binary sequence containing an address, coming from inputs A1–A5, and data reflecting the state of inputs D6–D9. The addresses are used here for the ‘house’ code, while data lines D7,D8,D9 code the transmitter number from 0–7. Line D6 transmits the battery status, measured by comparator IC2.

The detector is a normally closed type connected to inputs E1 and E2. In the absence of an alarm and if the battery is OK, IC3.A is inhibited, which also inhibits IC3.B. This prevents IC1 from operating, via its TE input, and also turns off T2, cutting the power to the RF module. The transmitter is then in standby and uses very little current. In the event of an alarm, i.e. opening of the detector contacts, or if the battery is low, IC3. A goes high and enables multivibrator IC3.B, which then generates a r=ectangular signal with a low duty cycle, owing to the large difference in the values of R9 and R10. When this is high, IC1 is enabled via its TE input and T2 is saturated via T1. The radio transmitter module is then powered and transmits the information supplied by IC1. This state continues as long as the alarm has not been cancelled or the battery replaced.

So the module transmits its status for a short time, then goes back into stand-by for a longer period, and so on. This makes it possible to on the one hand to economize battery life, and on the other, to minimize the collisions that might occur if other transmitters were to come on at the same time. Resistor R14 and zener diode D5 must be chosen according to the supply specifications of the radio module used (usually 5 V at a few tens of mA). It is essential that IC2 be a TLC271, which is the only one able to guarantee very low standby power consumption. The address-coding inputs are 3-state inputs. So each input can be connected to ground, to V+, or left floating. Obviously, you need to set the same code on all the transmitter modules and the receiver. The data inputs D7–D9 are binary, and you need to choose a different combination for each transmitter.

The receiver (Figure 2) does not include the UHF receiver, it’s up to you to choose which one to use.

The binary signal from the UHF receiver’s output is applied to the input of IC1, which is the natural companion to IC1 used in the transmitters. If there is a clash of addresses, the transmitter’s D6–D9 data appear on the same outputs of IC1. In addition, the VT signal goes high each time IC1 receives a valid data sequence. The three data bits corresponding to the transmitter number are decoded by IC4, a BCD–7 segment decoder. If its BI input is high, display LD1 shows the number of the transmitter that has triggered the alarm. The BI signal comes from a D-type flip-flop (IC2.B) that memorizes the alarm status, as it is triggered by IC1’s VT output. It is reset automatically at power-up via C3 and R11, or manually using push-button S2. In an alarm state, the flip-flop also energizes relay RE1 via T2. When the transmitter battery is exhausted, IC1’s D6 output goes high, setting off the audible alarm and lighting LED D5. Looking now at the receiver, we can tell if we have a ‘normal’ alarm (RE1 energized, no audible warning, LED not lit) or a low battery warning (RE1 energized, audible warning active, LED lit). In both cases, the display indicates the number of the transmitter concerned. Note that in the event of alarms from several modules, the display indicates the numbers of the modules concerned in turn, but this may be difficult to read if more than two transmitters are operating at the same time.

The power supply is stabilized at 5 V, except for the relay supply. This can be provided by a ‘plugtop’ adaptor or, better still, be tapped off the associated central unit supply, which usually has battery back-up in the event of a power failure. Remember to code A1–A5 as for the associated transmitters. Note too that, given the circuit used, the audible warning device must be a model with built-in electronics. The relay output should be connected to one of the inputs of the associated alarm system. 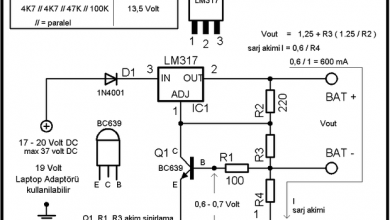